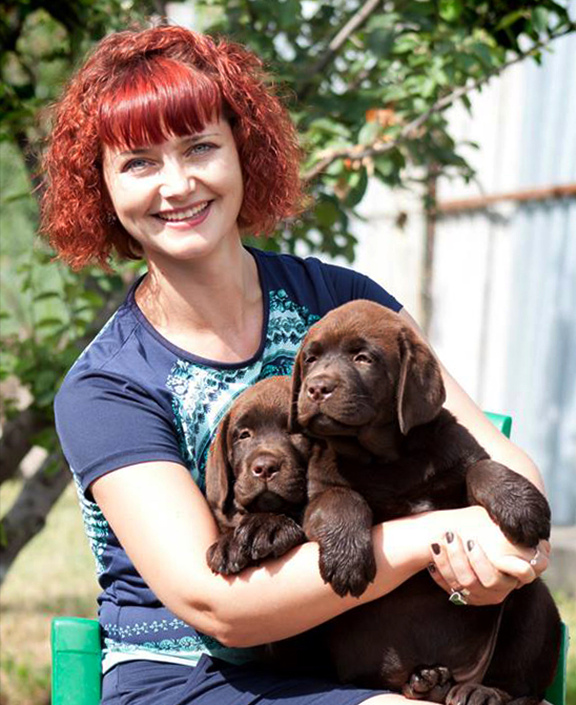 Its history start with the fact that I was a complete dilettante in matters of dog, to be honest, I could not distinguish from zwergpinscher pug and cocker spaniel – from the English Setter. But even then, I knew that somewhere in the world there is such a mysterious breed – a Labrador Retriever. At that time we lived dog breed collie, she was not a thoroughbred, but believe me it does not suffer. I remember her kind and gentle creature, unable to harm anything living on earth. But as always happens in life, your four-legged friend with whom you have lived 15/12/10 years and had become attached to him with all my heart – dies and thwarted all the beautiful moments, which sadly will remember flipping through old photos: but the we are on the river, and here for the first time at sea, and then went to pick mushrooms, but the funniest photo – hunting for frog …

All of this certainly will stay with you forever, but there comes a time when you cease to regret the past, and you realize that your real need of breath of fresh air.

He remembered the old dream of Labrador. As the breeze care hushed expanse of the river, and then develops into a storm, and the storm, and I could not keep a thought about a new friend, and decided to talk about it with her husband.

He agreed at once, I was happy and flying on the wings in anticipation of the meeting with the child.
As it turned out, it was a little girl – a girl Sonia, so called it first “parents”. We wanted to come up with a different name, but it is a wonderful creature, the two months of age could not be any other name other than Sonia. Officially, the name, which is in the pedigree, to say out loud at first was not possible. We rehearsed it syllable by syllable, and English spelling, without cribs generally had a hard time. Now, melodious – DELIGHTFULL Peppercorn – is pronounced in an aristocratic manner, with the accent on the last syllable.

Now we just can not imagine my life without this tireless perpetual motion, begatelya, prygatelya, vilyatelya tail and donor merry mood.

Puppy flown childhood as something very quickly, before we knew it, our baby yesterday turned into a blossoming young lady, and we, of course, went to conquer rings, exhibitions, city and even country. Due to its excellent conformation data, wonderful temperament and help of experienced handlers, Sonia won in many competitions, she liked to participate in exhibitions, she knew that her estimate, she is transformed into a ring, posed as a model in her movements felt the spirit and desire to win. Today, in addition to the collection of Sonya Ukrainian achievements cups, medals, souvenir gifts and diplomas from Russia, Moldova, Bulgaria. Our beauty has become Multichampion, Grand Champion of Bulgaria, Champion of Moldova and Russian Champion, and thanks to her we got the opportunity to travel the world, which is very welcome.

Over time, we came to the view that the Labrador should be at least two, … and our family had a second Labrador – adorable chocolate-with a motor of the pope and radiant eyes. The name she was a match for his character – cheerful, irrepressible, lit by a million smiles – HOLSTEP`S April Smile, and the house just Proshenka. On the day of her birth, the star was accompanied by the fact that breeders have chosen is consonant with the nature of its name, because the brothers and sisters Proshenki born March 31 to midnight, and it is the latter, as though waiting for when the clock strikes midnight and thus herald its birth – on April 1.

We live in a big happy family, love and respect each other. Each member of the family, first of all – the identity of all understand and accept this, so we live in complete harmony and understanding.

Thanks to our pets, my husband and I have mastered a number of new professions – steel handlers, hunters, fishermen, travelers and just caring and loving owners. In addition, my husband constantly hones and improves their skills photographer, he always manages to capture the most successful and memorable moments in the ring, and it is thanks to him that our website is always a photo report about the exhibitions, in which our pets participated.

Soon I realized that all people are divided into dog lovers and NEsobachnikov. My husband and I, happily identified themselves first, so we decided to register in FCI breeding factory. December 1, 2006 we received confirmation regisratsii our kennel, which was named «NIGHTSINGLE»

Every year, the Labrador Retriever breed becomes more popular, more and more people want to see is another svom Labrador. And no wonder, because the dogs of this breed miraculously combine the activity and creativity, temperament and poise, power and beauty, love of freedom and devotion, kindness and curiosity, passion and innate hunting instincts, versatility and originality. Mesmerizing appeal Labrador dark eyes did not leave indifferent even the inveterate NEsobachnika nevertheless Labrador for many people is still a mystery. Many passers-by on the street, turning us into a trail, a disapproving nod: “Walk with the Rottweiler without a muzzle.” Others remember, scratched his head: “Did you hear-hear, labrador powerful fighting dog”. I imagine this show (ha ha ha) – Labrador licked up to the enemy death. Even by definition in Labrador can not be the enemy, all for him – friends, everyone he met, he wags its tail and breaks into a loving smile. Life-sustaining Labrador position – to bring the joy of communication, give kindness owners and all others, and in turn we should cherish the friendship with these wonderful creatures – Labradors, cherish every minute with them, and they will respond to us with love and devotion a hundred times stronger our.

All the “dumb critters” such as fish, parrots, hamsters and rabbits, no doubt, have the right to exist, but you must admit that the dog, the only creature on earth that loves you more than himself. It is written in her eyes.